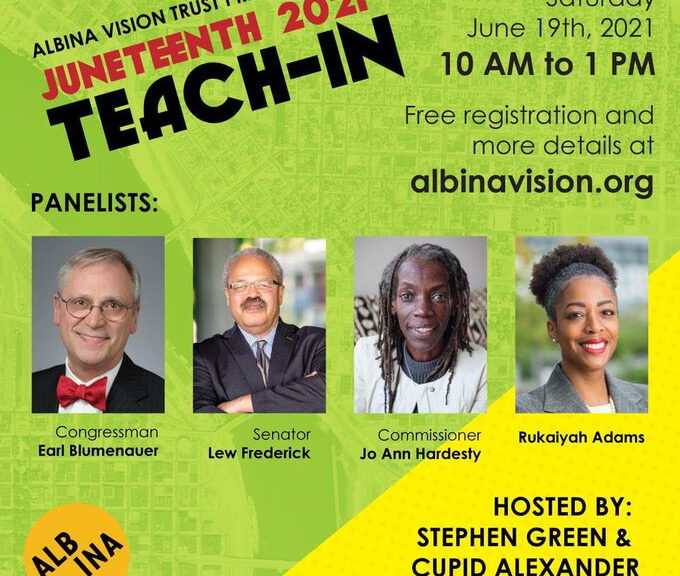 My summary of the AVT Juneteenth zoom event is as follows: Yesterday I sat in on the Albina Vision Trust (AVT) Juneteenth zoom, which was an effective theatrical production. The star of the show was Rukalyah and was directed by Steven Green and Cupid Alexander. They played the Avel Gordly (for who I have always had high respect) tribute to full effect and preached high rhetoric about the virtues of the Albina Vision. I could not help to think that many of these same individuals signed on to the disgraced former NAACP president E.D. Mondaine’s agenda and went down that rabbit hole with his vision and leadership. Rukalyah waxed eloquently about flying high on the wings of a dove to bring the black community back together again.

And as I listen to talk about this utopian vision described as blue skies and bliss on the top of the highway covers, I kept thinking; these are the same folks who can’t keep our streets clean, stop the scaring and trashing of our highway corridors, stop the encroachment of the homeless camps, arrest the graffiti criminals destroying property everyday, close the education achievement gap, and keep our police force from being in a state of chaos and stop gun violence. Yet, they would have all of us believe that they can execute a plan to make black people whole. They are the ones envisioning a promised land for black people on top of a heavily traveled highway. I kept thinking I do not need to rain on this parade about Juneteenth and the national holiday but I am not feeling free. White people are going to continue to commercialize this event like they have done the MLK holiday and black people will still be broke-ass poor and begging. Just give me my 40 acres and mule and stop the BS.

A new twist in AVT’s mantra revealed in this meeting was the advent of a world-class workforce incorporated in the Vision. I guess this was a way to throw a bone to the black contractors and blue-collar opposition to the Vision. I guess some one realized that there is the question of what comes first, the chicken or the egg. It has dawned on somebody that their perceived utopia cannot be sustained without the inhabitants having the ability to pay the rent. However, they continue to mislead the community about the consequences of a delay in the process. They continue to attribute this to mischief by ODOT attempting to divide the black community and ODOT seeking to deny black people access to stolen land.

Finally, it was tragic to hear Earl Blumenauer admitting that black people pay more in gas taxes and contribute more to the carbon foot print than whites. Yet he knows this is taxation without representation and has watched for decades billions of dollars flow into Oregon’s economy and black people receive next to zero economic benefits. His hypocrisy and those who collaborate with him are breathtaking. Albert Lee knows what I am talking about.

I was thinking as I listened to these folks, what universe do they live in? Living down the street from Dawson Park keeps me grounded and I could not hear what the AVT zoom presenters were saying, because I can see what they do.

Happy Father’s day to the ultimate Father who art in Heaven. 3 thoughts on “Forty Acres and a Mule”