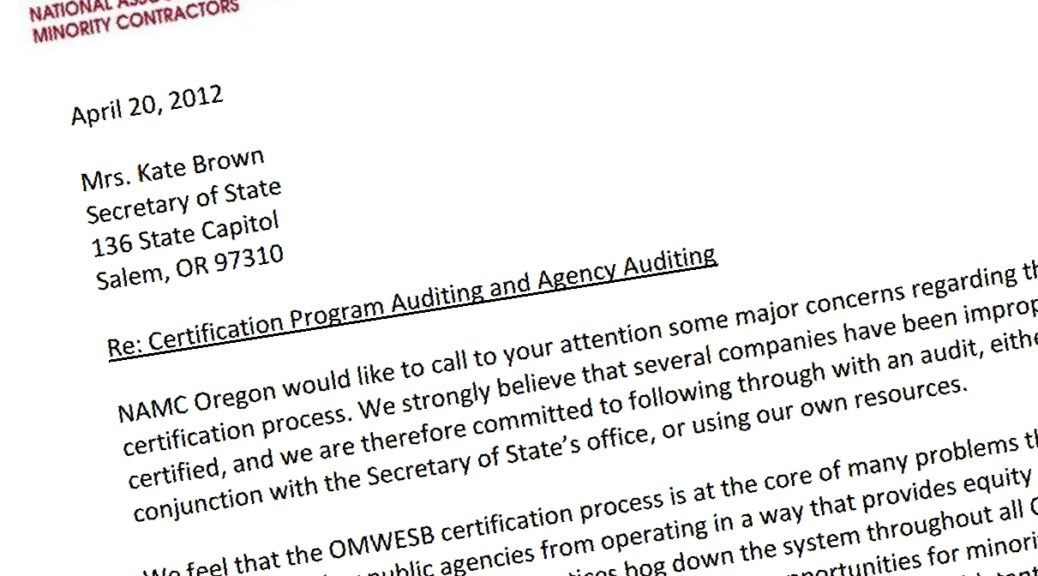 To: Ray  LaHood, Secretary US Department of Transportation
From: Eddie Rye, Jr.

The attached letter (click for attachment) from the Oregon State Chapter of the National Association of Minority Contractors (NAMC) documents the widespread abuse of the United States Department of Transportation’s Disadvantaged Business Enterprise (DBE) program and there has been an alleged three year investigation by the FBI and the U. S. Department of Transportation Office of Inspector General into DBE fraud in Seattle and Martin Luther King, Jr. County.

This is a very serious matter that deserves immediate attention. There is an obvious blatant disregard for the law and since prime contractors know that they will not be disbarred or go to jail, they just simply pay a fine, not admit any wrong doing, and go on to the next contract. This has been standard operating procedure for the last forty years In Seattle and Martin Luther King, Jr. County. The FBI and The U.S. Department of Transportation’s Office of Inspector General has a preponderance of evidence of DBE fraud, but no action has been taken to enforce the “Law”, as a matter of fact several of the DBE’s supposedly under investigation continue to be named to fulfill DBE requirements in spite of the evidence of “Bid Rigging, Collusion, and Fraud”.

It’s unfortunate that the abuse of U.S. DOT DBE Program is widespread  “Fraud and Fronting” is prevalent in the Northwest and without US Government intervention there will not be any viable African American or minority contractors left.

Could it be that agents of the US Government enforcement agencies have a difficult time bringing white men to justice on behalf of African Americans and other people of color?