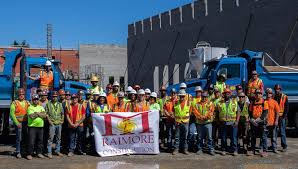 More than a just a highway expansion.

For black people, It’s a chance to repair wrongs and chart our own destiny. The I-5 Rose Quarter Project is a $650 million Oregon Department of Transportation (ODOT) construction project that is designed to help alleviate the bottleneck congestion on I-5 through the Rose Quarter corridor. The project will build a cap/lid on top of the freeway and complete some additional widening to speed the flow of traffic in this area.

African-American community. Like the ‘urban development’ that happened to so many Black communities around the country, this community was targeted and decimated by many major infrastructure projects that routinely displaced minorities. Examples include the initial construction of I-5,

Memorial Coliseum, Emmanuel Hospital, the Oregon Convention Center, and many other Portland developments over the past 70 years.

The Black community was further destroyed by “redlining” and later the gentrification process that followed around this same time. Furthermore, to add insult to injury, the community did not receive any economic benefit as a result of the wealth that was created by these projects. Minorities were systematically locked out of employment opportunities and our businesses were unsuccessful at winning meaningful work through the diabolical utilization of federal wage rates, unions, low-bid, and pre-qualification policies.

For the first time in its more than 100-year history, ODOT is using the Construction Management/General Contractor alternative delivery method to procure this project instead of the traditional low-bid process. They hired general contractor Hamilton/Sundt Construction company, who subsequently teamed with Black-owned Raimore Construction, who is intimately tied to the community. The entire project team is empowered by ODOT to utilize this project to start the economic empowerment of Black and other minority communities through living-wage employment and entrepreneurship.

Understand, this is the same community that has historically been marginalized and oppressed by systemic policies that have institutionalized racism and white supremacy. We have an opportunity to start the process of restorative justice for our community.  Although some development is included, it generally does not meet the needs of minority populations the way living wage jobs and entrepreneurship does. Indeed, living-wage employment is critical to homeownership, which is the biggest wealth creator for individuals, families, and small businesses and is the cornerstone to wealth creation for our nation.

The I-5 Rose Quarter project is a perfect catalyst to start this process due to its size and the fact that the construction will run over a 4 to 5-year period. It will create many living-wage jobs not only in the trades but in the areas of administration, engineering, project management, marketing, accounting, finance, human resources, and community relations. The duration of the project will provide an opportunity to go from entry employment to creating long-term living-wage career opportunities for our people. That is especially important because it generally takes 2-5 years to become a journeyman or to gain proficiency/competency in this work field.

As usual, community factions are working subversively to prevent this project from moving forward, including the No More Freeways group, the Elliot Neighborhood Association, and Portland Public Schools. Push back to these objections point to recently conducted traffic studies that show that idling stop-and-go traffic creates more pollution than free-flowing traffic. Subsequently, fixing this bottleneck should aid with reducing carbon emissions and thus increase and improve air quality. In contrast to this, the timing of PPS’s concerns about increased air pollution at Harriet Tubman MS is telling. Now they want to raise the pollution concerns for children, although this school has been attended by Black and Brown children for decades.

We all know that the health of the minority community has never been part of any environmental consideration, which is why the freeway was built through the heart of our community in the first place. Consequently, the levels of pollution were never questioned previously when the school was attended primarily by Black and brown children. Certainly, we all should be concerned about global warming and the environment and its impact on people, the community, and the world.  It appears that environmentalists, the neighborhood associations, and uninformed communities are being bamboozled into fighting a battle to delay the building of this project for other disingenuous reasons.

Economics through living-wage jobs and industrial entrepreneurship has always been the goal and is essential to establishing and building a healthy and vibrant community. Black people must have consistent means of bringing dollars into their community. And once these dollars are in the community, we can now start the true re-building process by our own hands and build our wealth by keeping those dollars circulating throughout the community. This is the only way Black-owned businesses such as beauty and nail salons, barbershops, restaurants, art and entertainment venues, professional offices, and other service-oriented businesses get established and grow. They all make up a healthy vibrant community, all following and flowing from a strong economy.

Although it is not the only form of a developing economy, the construction industry is critical to a vibrant community. This is primarily due to the limited barriers to entry without the need to incur major capital or debt. All you need to be successful is to show up consistently, have a positive attitude and strong work ethic to establish a living-wage career in the field. In addition, there are many professional positions that one can grow into without requiring formal education, including becoming a small business owner which again is the cornerstone of wealth creation in this country.

To sum up, all these factors are why the I-5 Rose Quarter project is so important to Portland’s Black and other people of color communities. These various arguments against the project should not be allowed to impede its progress.