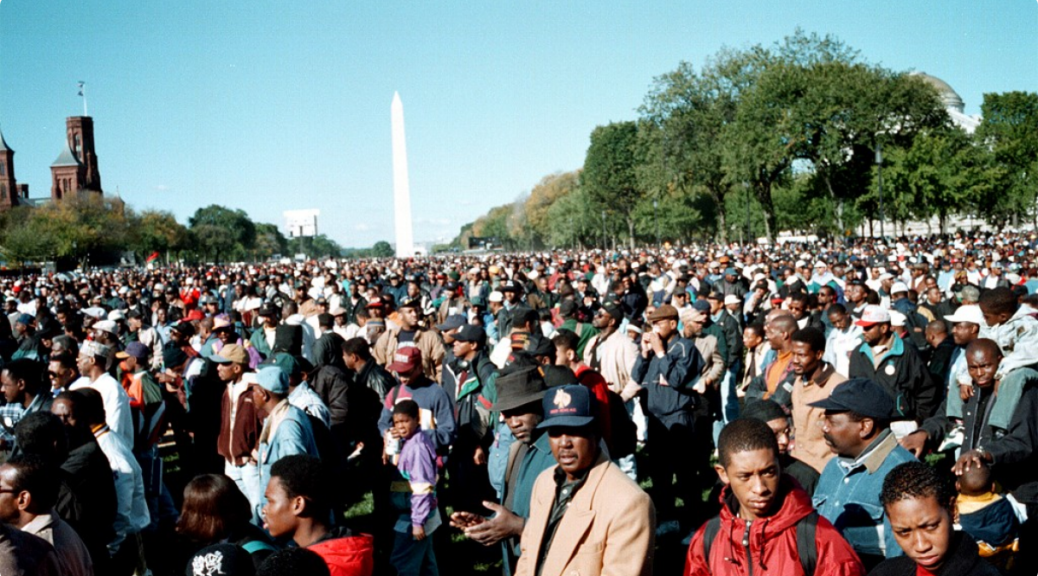 What does the advent of the new Black Male Achievement (BMA) project and the 1995 Million Man March have in common?

As an organizer of the Portland contingent that traveled to the March in Washington, DC back in October 1995, I was struck by a reference to the pride of black men made by Mayor Hales in his recent state of the city address.  He actually quoted Joyce Harris about being proud of black men, when the BMA made its debut at the SEI news conference in January.  What the Mayor left out of his remarks was the context in which Joyce made the statement. She said she could not be more proud of black men since the Million Man March.

Now that we are coming up on the 20th anniversary of the March, I thought it would be useful to do some reflecting. I too have never been more proud of black men exalting in their blackness in such an amazing demonstration of power and unity. The March was truly an exhilarating experience.

The event boasted no violence, was well organized and was out right impressive, bursting with inspired and hope-filled messages. Although the group I went with was not Nation of Islam members, once there, we collaborated well, as brothers and sisters from all faiths. I even ran into Baruti Artharee and Joyce Harris at the event. We were all over joyed and elated by the experience because it was such a great day for black men worldwide.

Unfortunately when we got back to Portland, all that inspiration dissipated. We relied heavily on the local members of the Nation of Islam to the carry out the message and implement the action plan to lift the community out of the mire of problems that continue to plague our community today. We were supposed to lean on the Nation’s established organization, called the Local Organizing Committee (LOC). Who knows why this effort did not have stronger leadership across the board. And to this day I reminisce about what should have happened. But, long story short, it never developed. It is exasperating and absolutely frustrating to know as a people that we have had so many opportunities over several decades to cement a strategy to change the course of the black community’s demise.

In spite of BMA’s steering committee being composed of a cadre of incredibly bright and talented black men, I am not so sure the group gets it. I hope the BMA efforts do not follow the pattern of the LOC or repeat efforts like Tavis Smiley’s “Convent” idea that never got off the ground.

It is significant that the Mayor took the steps he did to jump start the BMA initiative. But his remarks included a not so subtle message that the City can only help. The true burden to bringing about change rests with black men. As members of the committee, we should do our best to encourage a self-sustaining agenda that will chart a persistent course of self-reliance. Anything less means this effort, like too many others, is destined to fizzle away.

3 thoughts on “Is Portland’s Black Male Achievement Project for real?”