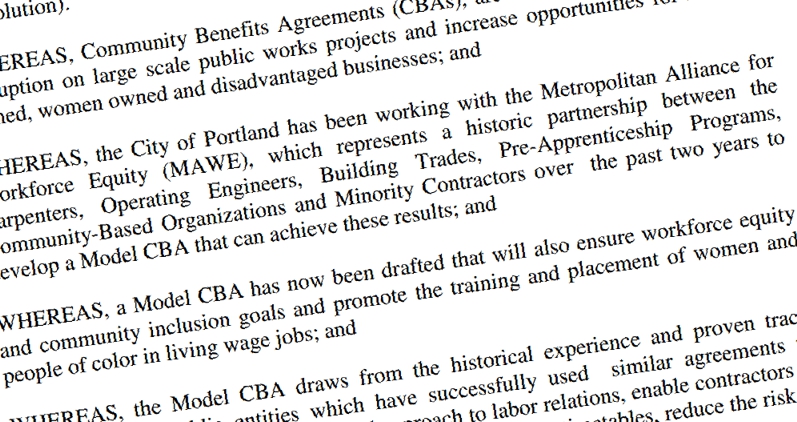 I was not in town when city council adopted the Community Benefit Agreement (CBA) which should have been called the Union Benefit Agreement (UBA). This crafty concept financed and promoted by the unions is explicitly designed to benefit the union agenda long-term. Because this nefarious effort was presented with a measure of good politics and cloaked intentions, its paid lobbyist (former city commissioner) could sell it to an unsuspecting naive community.  It was good politics to involve the Urban League, who doesn’t have a clue of what is really going in the minority contracting community. The Urban League is completely vulnerable to the notion that unions will increase minority participation on public construction contracts. But the evil fact is that unions have no history of ever substantially increasing their ranks of black and brown workers in any context. The proponents of this concept would have us believe that unions have found religion but we are more likely to go further into hell’s hand basket because of this agreement. All the politicians and their supporters can feel good that they successfully pulled the wool over the black community’s head again without any political consequences. The pattern continues.

Look at the evidence. All one has to do is look at the current workforce composition of those unions (if you can get public disclosure) and companies who are supporting this measure. It is like putting your hard earned money into a bank that has a series of defaults. It tells a clear story of what is in store for minority contractors into the future.  The CBA is based on a preferred position for a union controlled workforce; as a consequence alternatives for a diverse workforce will be greatly diminished.

The CBA is like other bad policy ideas our progressive city council has imposed on the black community. Look at the affordable housing policy that has produced high levels of gentrification. We wonder why urban economic development policy has helped decimate black businesses. Why there is a continuing effort to support a sheltered market construction concept that will assist more whites (ESBs) than minorities? And the list goes on. God save us from our progressive friends.